Super Bowl XVIII reminded us once again that sometimes these games become blowouts.  I cannot remember a team that dominated Sports #1 Event like the Seattle Seahawks did since the 1980 49er and 1970 Steeler Dynasty Teams Did.  In no way am I comparing the Seahawks to those teams as they have much work to do to reach that level.  However, I think every sports fan in America was taken by surprise with the result of Sunday’s Game (Including all Seattle Fans).  Yes, the line was only 2 Points and the Broncos were favored.  How could they not be?  Peyton Manning, Julius Thomas, Wes Welker, Eric Decker, Demariyus Thomas, Knowshon Moreno and all of that offensive talent.  That talent set many NFL records this season.

Well I guess the old saying Defense wins Championships is really true.  Just like they always say that in Baseball that Pitching wins Championships.  We had an immovable object in this game with the League’s #1 Offense vs. the League’s #1 Defense.  When I look back at all of the previous Super Bowl Champions of years past there truly is one fact that stands out.  The teams that win the Big Dance always have a better than average Defense.  Let us just look at the past few years.  Last year, the Baltimore Ravens had the league’s most vaunted Defense with Ray Lewis and Company.  Before them, both Giants teams that won also had great defenses.  The Patriots teams that won in the past also had great defenses (in spite of their stellar offenses).  The list can go on and on.  The last Offense that I can remember that was on Denver’s level playing in the Super Bowl was the Saint Louis Rams and the Greatest Show on Turf.  However, that Rams team had one of the better defenses as well that season and went unnoticed.

The Denver Broncos of 2013 surely set many Offensive Records.  However, the Denver Defense may have been one of the worst ever.  They were ranked at the bottom in almost every category.  So fast forward to the game.  If it was not an omen on that first play from scrimmage when the ball was errantly hiked over Peyton Manning’s head that resulted in a safety, then I don’t know what an omen is.  Then Seattle went ahead 15-0 at halftime and people were like…ok the Broncos can still make a comeback.  I don’t know what coach John Fox said to the troops at halftime…however the players must have been listening to headphones because they came out after the half and let Percy Harvin go 109 yards for a Kickoff Return.  The game was definitely over there.

The Seattle Seahawks earned this win the old fashioned way.  They played smash mouth Football and totally dominated the line of scrimmage.  Everyone in the media is focusing on how Denver choked and that Peyton Manning can never win the big game.  I seriously do not think anyone is giving Seattle enough credit for what they were able to accomplish, with a sophomore Quarterback no less.  Yes, the Broncos failed to show up.  However, that had more to do with Seattle’s tenacity than a lack of effort from Denver.  Everyone will debate how Peyton Manning is just another Quarterback and thats a debate for another day.  This day needs to be a focus on the Seattle Seahawks and their amazing run to the championship.  I must admit, Im not a Denver fan but I did pick them to win the game.  I was STUNNED!!!

Ok here we are now, Eli Manning is 2-0 in Super Bowls and Peyton Manning is 1-2.  Does that mean Eli Manning is a better Quarterback than his brother?  Of course not, Football is a team sport.  However, this loss did a lot to damage Peyton’s legacy.  No one will take away what Manning has accomplished and I still rank him in the Top 5 Quarterbacks of all-time.  However, he cannot be #1.  The Seahawks Defense were able to do what no other team did this season.  The Seahawks pressured Manning.  He threw two Interceptions.  He just was not the same player he was all season.  Through all of that, ironically he set a Super Bowl record for completions with 34.  Demariyus Thomas, Peyton’s favorite target in this game also set a record with 13 receptions.  And yes, Julius Thomas dropped quite a few would be first downs.  However, Kudos to Pete Carroll and the Seahawks for an excellent game plan. 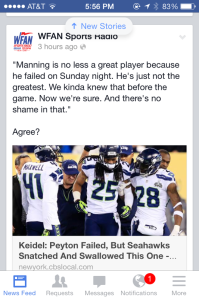 Check out this Tweet from NY’s WFAN.  I think this is perfect of an assessment that has been made regarding Peyton. I am sure there will be many debates in the days to come.  However, I think people need to stop dwelling on the negative (Denver and Peyton Losing) and focus more on the positive  (The Seattle Seahawks are Super Bowl Champions).  Wow, I can’t imagine.  I am an Eagles fan and still waiting for the thrill of winning.  Maybe next year.  Ok, well this was a great day for a Seattle and a dark day for Warren Sapp, who reportedly bet 10,000 Dollars on the Broncos.  Even more crazy, Floyd Mayweather bet 10,000,000 Dollars.  Ten Million Beans.  Oh well, thats why I never bet.  Well, stay tuned as I will be monitoring whats in store in the new year for music.