So I thought I would do something I haven’t done in awhile. I have picked one of my favorite Bands and we will analyze two of their albums to see which one was a better hit. Today’s band is Mötley Crüe. Mötley Crüe has long been one of my favorite bands and are definitely at the top if not the top Glam/Hair Heavy Metal band of all-time. Yes, Lead Vocalist Vince Neil did leave the band for a short time, during which The Crüe released self titled album Mötley Crüe behind John Corabi. However, besides for this brief hiatus, Mötley Crüe has been rocking this planet year after year.
Mötley Crüe may be considered the World’s Most Dangerous Band and this has been well chronicled in the Best Seller Mötley Crüe: The Dirt. The Dirt is a line by line account of the lustrious, Drug addicted, Sex riddled, Extreme Concert, crazy history of the band told by each Band Member’s perspective. After reading The Dirt, one would wonder how any of these guys are still alive! Seriously, this Band did it all and they were dangerous. They definitely lived life on the Wild Side, no pun intended. Mötley Crüe has released numerous Top Hit albums, but today we will focus on two of their best: Shout at the Devil and Dr FeelGood. If course, Shout at the Devil was released in 1983, while Dr FeelGood was released in 1989. Both of these albums portray Mötley Crüe at the Top of Their Game.
First we will look at Shout at the Devil, Mötley Crüe Second Studio album release. Shout at the Devil reached Number 17 on the Top 200 Billboard Rankings. Shout at the Devil has sold over 4 million copies in the United States and has been one of their most popular albums produced. The album starts off with a quick intro called “In the Beginning”. The album then kicks into the title track “Shout at the Devil”, which pits Nikki Six and Mick Mars at their best along with an incredible Drum rendition by Tommy Lee.
Looks that Kill is a fast speed metal song with a killer message. Bastard and God Bless the Children of the Beast although they did not receive much airplay, are also hit songs in their own right. Of course, Helter Skelter was a cover song of the Beatles Former hit and Mötley nailed it perfectly. Even the solo was a heavier version of Paul McCartney’s Thriller. This song is followed by another speed anthem of Red Hot and then To Young to Fall in Love which pretty much describes the state of the band at the time as far as relationships go. Knock Em Dead Kid is another hit followed by Ten Seconds To Love. The album closes with “Danger”.
Shout at the Devil was only Mötley Crüe second studio album but it remains right at the top of their catalog. Even though the band was still fairly young in their career, the music was well written and scripted and they had a good producer along with sound quality. When you pop this album into your CD player you would never be able to tell that this was one if their first albums.

Ok, fast forward to 1989. Mötley Crüe was well on their way to Rock Stardom and had two more albums under their belt at this point. When Dr FeelGood was released it hit Number 1 on the Billboard 200. This was an amazing achievement and milestone for the band. Dr FeelGood was released after an iconic attempt from the band at sobriety and drug rehabilitation.
Dr FeelGood has now sold over 6 Million Copies in the United States alone and is regarded as one of their most all around Musically Acclaimed albums. It begins with another pounding intro in Terror in Tinseltown. The Intro dives right into the Second and also title track Dr FeelGood. Dr FeelGood is a very powerful song that had a theme of drugs and the enormity of the drug trade at this time. The Hit Title Track is followed by 2 more classics in “Slice of Your Pie” and “Rattlesnake Shake”. These two tuned were also well written and musically put together. The next track, Kick Start My Heart may very well be Mötley Crue’s best and heaviest anthem. Kick Start My Heart is a heavy fast thrill ride with excellent guitar work and heart pounding drum beats. Vince Neil has the perfect voice for this band. KickStart My Heart and Dr FeelGood were both nominated for Grammy Awards but lost.
Without You is one if The Crue’s more serious ballads and is followed by the hit Same Ol Situation, which is about the bands quest for multiple women and conquests. “Sticky Sweet and She Goes Down”are two more tracks that chronicle the dark side of females. Then the album shifts to the ballad Don’t Go Away (Mad) which may be their best all around song ever released in my opinion. The song carries a good message and provides the listener with excellent arousal. The album closes with the song “Time For Changes” which shows a more humble side of Mötley Crüe.

Ok, this was a very tough pick. I mean, I am a tremendous fan of both albums and they both represent important soundtracks to my life. If you look at the stats, Dr FeelGood has better numbers having sold more albums, producing more Top 10 Hits, and the awards that this album was nominated for. However, Shout at The Devil is no slouch and was an awesome album nonetheless. I purchased Dr FeelGood before Shout at the Devil as I became a late bloomer as far as Mötley Crüe goes. The more I listen to Shout at the Devil though, the more this album grows in you. In a photo finish, I am taking Dr FeelGood as the better of the two albums but not by much.
If you are not a fan of Mötley Crüe, you need to own these two albums as an essential part of being a fan. Both of these albums are classics in my mind and I can listen to both of them over and over again and not get sick of either. When I listen to these albums…I feel like I am in Los Angeles living the same lifestyle as Mötley Crüe. I also highly recommend buying the Best Seller “Dirt”. Stay Tuned for more Album reviews. 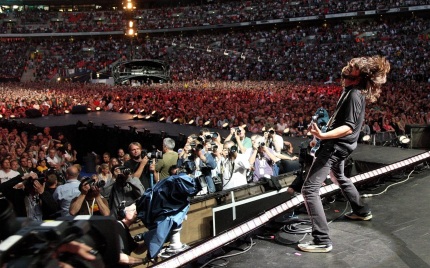